How Restaurants Can Market to Gen Z 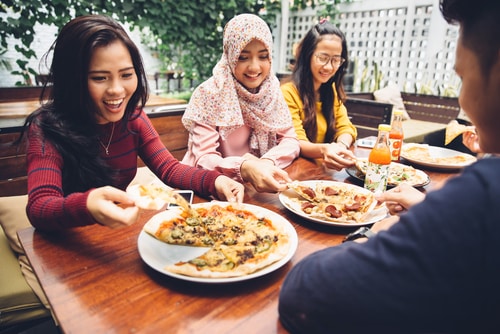 Today America is seeing the birth of the next generation, currently being referred to as “Gen Z.” Categorized as those born after 1995, the earliest members of the Gen Z cohort are getting ready to graduate college and moving into adulthood.

As a restaurant owner, you’ve likely figured out how to connect with baby-boomer, Gen-X and millennial diners, but what about marketing to the next generation?

According to a recent report from student affinity network UNiDAYS, now is the time to start exposing your business to Gen Z. According to the company’s report titled “Gen Z: What Restaurants Need to Know”, 78 percent of Gen Zers spend the majority of their disposable income on food.

To help your restaurant target these Gen Zers who love to dine out, NCR Silver talked to Marissa Allan, vice president of partner innovation at UNiDAYS, for her advice.

Move past the ‘broke student’ mentality

Allan’s first recommendation was to rethink your preconceptions of a high-school or college student’s budget.

“Conventional wisdom would assume that students rely on meal plans. The truth is they have the spending power and the time to try other restaurants. The same is true for retail and other categories.” -Marissa Allan (Photo: Marissa Allan)

“Conventional wisdom would assume that students rely on meal plans,” she explained. “The truth is they have the spending power and the time to try other restaurants. The same is true for retail and other categories.”

When eating out, Gen Z spends more on average than what is typically expected of students. Nearly half of those surveyed said they regularly spend $10 to $20 per order, and 15 percent report routinely paying more than $20 for a meal.

While they may eat out a lot, Gen Z isn’t bad with managing money. In fact, Allan said this group tends “to be more financially savvy and responsible than previous generations. They are willing to spend but expect value.”

To reach this audience, try offering a standard discount with a valid student ID or BOGO deals to entice the dating crowd. A whopping 93 percent of students surveyed told UNiDAYS they are more likely to try a restaurant that offers student discounts.

“Like most generations, Gen Z likes to feel special. However, personalized offers are complicated to execute. A more scalable way to accomplish this is to deliver an exclusive offer to a community where Gen Z is an engaged member,” she said. “Look for local chapters of student-run organizations that have an ample following.”

Make your food tasty and photogenic — members of Gen Z communicate with pictures has much as they do with words. (Photo: Daxiao Productions/Shutterstock)

Allan said to remember that most members of Gen Z are heavy social media users and communicate with pictures as much as words.

“They are true digital natives — the first generation born with the internet as a part of their daily lives,” she said. “Mobile phones are attached to them at all times.”

Luckily, the world of food is vibrant, colorful and photogenic. This gives your restaurant industry a unique opportunity to connect with Gen Z using visual appeal.

“Gen Z often communicates in images, so if you have a photogenic product, be sure to dedicate resources to leverage images and video snippets of your product aimed at Gen Z,” Allan advised.

Growing up in a time when traditional television is becoming a thing of the past, Gen Z lives in an on-demand world, said Allan.

“We’ve seen a shift away from the traditional seasonal-only promotions as Gen Z seems to be more open to impulse-driven purchases that are relevant to a specific need or time,” she said.

While only 5 percent of Gen Z plan their meals in advance, according to the survey, nearly half (48 percent) of respondents said they try a new restaurant at least once a month.

“Restaurants can take advantage of that openness and spontaneity by using tactics such as mobile push alerts for promotions of menu items and pricing geared toward Gen Z,” she said, so you can reach them anytime and anywhere they’re hungry.

It’s clear students don’t need much convincing to eat out. The key is getting them to choose your restaurant and keep them coming back.

“Marketing to Gen Z can’t and should not be a one-size-fits-all approach,” said Allan. “If you want to attract Gen Z, you’re going to have to learn to play by the rules of the students. You’re going to have to learn new ways of cultivating brand loyalty, because the old ways — the ones that worked so well with millennials just a few years back — are quickly drying up.”