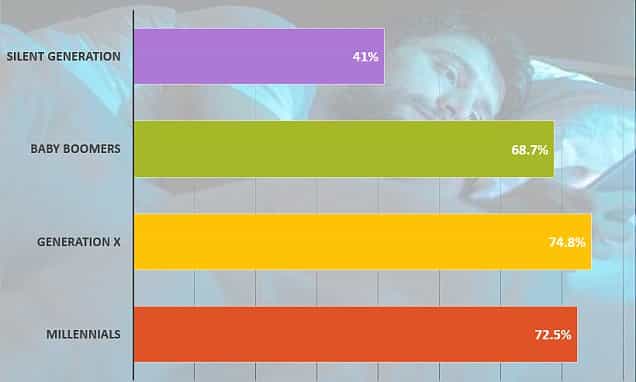 A majority (69 percent) of Americans say they are so worried that they’re periodically losing sleep – and relationship stress is the leading reason, according to a new survey.

Relationships – whether romantic or otherwise – were responsible for keeping 41 percent of Americans awake in the wee hours, according to a survey of 1,000 people by BankRate.com.

Overall, money was the second biggest stressor, with 36 percent of all respondents citing that as a problem, followed by work (30 percent), health issues (28 percent) and politics (14 percent).

Among those who were stressed about money, saving enough for retirement was the top concern (18 percent), followed by paying off credit cards (14 percent) and paying for health care or insurance bills (12.7 percent).

‘People are going through a lot,’ said Amanda Dixon, an analyst for Bankrate.com

‘Even though the economy is doing well, there are a lot of people who are still struggling with what’s happening in their day to day lives,’ she added. ‘Even though a lot of these problems can’t be solved overnight I think it’s important to acknowledge what’s wrong and think hard about what you can do to solve that problem and seek help if necessary.’

Women were more likely to report sleepless nights, with more than 73 percent saying they struggle with the issue compared to nearly 65 percent of men.

Women were also more likely (45 percent) to identify relationship stress as the source of their lost sleep, compared to 35 percent of men.

‘Women have a lot of concerns that men don’t have to worry about,’ Dixon said. ‘Women have to deal with inequality and the gender wage gap and often women have to decide between advancing their careers and juggling that with raising young children.’

The more educated people were, the more likely they were to report losing sleep – with 43.5 percent of college graduates reporting it as a problem, compared with about 40 percent of people who have attended some college, or 38.6 percent who have a high school degree or less.

American women are nearly 9 percentage points more likely to lose sleep than men, according to a new survey

Generation X is most likely to report losing sleep, followed by Millennials and Baby Boomers. The Silent Generation was the least likely to have this problem

The survey also found differences between generations: Generation X was the most likely to lose sleep, with nearly 75 percent saying it was periodically an issue, followed by Millennials (72.5 percent) and Baby Boomers (68.7 percent).

The Silent Generation (age 73 and older) were the least likely (41 percent) to have that problem.

‘Older people are either retired or they don’t have the same stressors that they were dealing with before,’ Dixon said. ‘A lot of them have gotten to a point where they have paid off their mortgages … They’ve begun to transition to worry about their health.’

Overall, half of Millennials were likely to lose sleep over relationships compared with 36 percent of Baby Boomers and 42 percent of Generation X.

Millennials are also the group most likely to lose sleep due to stress at work (39 percent), followed by Generation X (37 percent) and Baby Boomers (22 percent).

Among Baby Boomers, younger ones (ages 54-63) were most likely to be concerned about money (39 percent), while older ones (ages 64-72) were more stressed about their relationships (37 percent).